Celebrate National Lighthouse Day with Lighthouses in our area!

NATIONAL LIGHTHOUSE DAY is Observed is annually on August 7, National Lighthouse Day honors the beacon of light that for hundreds of years symbolized safety and security for ships and boats at sea.  At one time, the beacon of light could be found across almost all of America’s shorelines.A lighthouse is described as a tower, building or any other type of structure that is designed to emit light from a system of lamps and lenses and used as an aid to navigation for maritime pilots at sea or on inland waterways.

We have some great constructed Lighthouses throughout the Florida Keys. In honor of National Lighthouse Day here are some incredible photos and facts:

Alligator Reef Light is located 4 nautical miles east of Indian Key, near the Matecumbe Key, north of Alligator Reef itself. The station was

established in 1873. It was automated in 1963 and was last operational in July, 2014. The light is 136 feet (41 m) above the water. The name honors the U.S. Navy schooner Alligator, part of the U. S. Navy Anti-Piracy Squadron that had recently been established in Key West, which went aground at this location in 1822. The Alligator was blown up after removing as much as possible from it to prevent it from being used by pirates. Countless vessels have also sunk here on the reef’s jagged coral.

Carysfort Reef Light is located approximately six nautical miles east of Key Largo, Florida. The lighthouse has an iron screw-pile foundation with a platform, and a skeletal, octagonal,

pyramidal tower, which is painted red. The light is 100 feet (30 m) above the water. It was the oldest functioning lighthouse of its type in the United States until it was decommissioned in 2015, having been completed in 1852. Carysfort Reef is named for HMS Carysfort (1766), a 20-gun Royal Navy post ship that ran aground on the reef in 1770.

Sombrero Key Light is located offshore of Vaca Key in Marathon, Florida. The lighthouse is located on a mostly submerged reef. The name Sombrero Key goes back to the Spanish, and old charts show a small island at

the spot, but by the later 19th Century the island had eroded away, with some parts of the reef exposed at low tide. As a result, the reef and the lighthouse have also been called Dry Banks. The Sombrero Key Light is the tallest lighthouse in the Florida Keys, and was the last lighthouse constructed under the supervision of Lieutenant George Meade of the Bureau of Topographical Engineers.

Sand Key Light is a lighthouse 6 nautical miles (11 km; 6.9 mi) southwest of Key West, Florida, between Sand Key Channel and Rock Key Channel, two of the channels into Key West, on a reef intermittently covered by sand. At times the key has been substantial

enough to have trees, and in 1900 nine to twelve thousand terns nested on the island. At other times the island has been washed away completely. The first navigational light on Sand Key was a 60-foot (18 m) brick tower built in 1827. After the first keeper, John Flaherty, died in 1830, his widow Rebecca took over the job. In 1844 a hurricane eroded part of the island, destroyed the keeper’s house, and damaged the seawall. The Great Havana Hurricane of 1846 toppled the tower, killing Rebecca Flaherty and five others.

during the storm, reported “a white sand beach covers the spot where Key West Lighthouse stood”. After the Coast Guard decommissioned the Key West Light in 1969, it was turned over to Monroe County, which in turn leased it to the Key West Arts and Historical Society. The society operates the lighthouse and its associated buildings as the Key West Light House and Keeper’s Quarters Museum. On display at the museum is the first order Fresnel lens from the Sombrero Key lighthouse.

The American Shoal Light is located east of the Saddle bunch Keys, just offshore from Sugarloaf Key, close to Looe Key, in Florida, United States. It was completed in 1880, and first lit on July 15,

1880. The structure was built to the same plan and dimensions as the Fowey Rocks lighthouse, completed in 1878. As early as 1851 plans were made for the erection of a series of great offshore lighthouses to mark the dangerous Florida Reefs. These towers, all skeleton iron construction, to resist hurricanes, were eventually built one at a time over a period of years, that on American Shoal completed in 1880, being the most recently constructed. 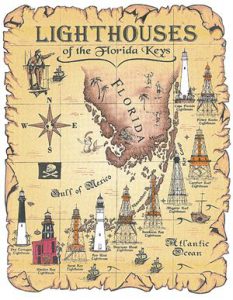