Submerge yourself in the long ago ways of the wrecking industry.  This 11-acre island is deserted except for the ruins of a town that existed in the early 1800s, when people made their living salvaging boats that ran aground on local reefs. Get adventurous, rent a paddle board or kayak from Robbie’s Marina or from your private home at Tarpon Point to visit and experience our warm, tropical sunshine and unique history.

It was December 25, 1838 when Hester Perrine and her family arrived at Indian Key. She would later write, “I cannot forget our delight on first seeing the beautiful little island of 12 acres. It was truly a ‘Gem of the Ocean.’ The trees  were many with many of them covered with morning glories of all colors, while the waving palms, tamarinds, papaws, guavas, seaside grape trees and many others too numerous to mention made it seem to us like fairy land, coming as we did from the midst of snow and ice.”

Today Indian Key looks like just another mangrove island rising from the Atlantic shallows off the Matecumbe Key, but then looks can be deceiving. Back in the 1830s this seemingly nondescript island was home to not just a thriving wrecking village, but the largest community in the Florida Keys outside of Key West. Believe it or not, the island not only had a population of more than 140 people, but a restaurant, saloon, hotel, nine-pin bowling alley, and billiards table. 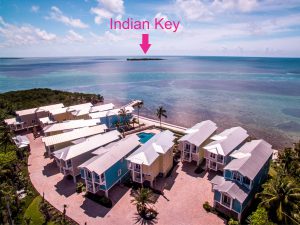 Why did Indian Key become such an important stop along the Florida Keys? First, the island is located approximately midway along the Florida Reef—which begins to rise from the Atlantic floor near the Fort Lauderdale area and comes to an end some 70 miles southwest of Key West near the Dry Tortugas. Second, and due largely to the island’s offshore locale, historically it has maintained a reputation for remaining relatively mosquito free. Also, the island was once home to a naturally occurring deep harbor. Lastly, and perhaps most importantly, nearby Lower Matecumbe Key was the site of five freshwater wells approximately four feet deep and considered to be the most reliable source of freshwater in the island chain.

Purchased by the state in 1970, Indian Key Historic State Park is the Florida Keys only ghost town. Interpretive plaques located around the island tell some of the island’s history. Accessible by boat or kayak only, it is a comfortable 25-minute paddle from Robbie’s Marina where kayaks can be rented at Florida Keys Kayak. To learn more of the island’s amazing story, local historian and author Brad Bertelli offers interpretive tours around the island through his company Historic Upper Keys Walking Tours. To really get a picture of how amazing this little island once was, visit Upper Matecumbe’s Keys History & Discovery Center where a model of the island showing how it would have looked circa 1838 is on display.

Indian Key is easily accessible by Paddle board or kayak from U.S. Highway 1. 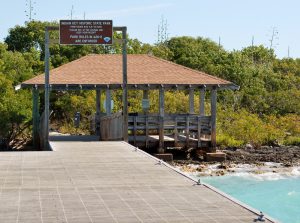 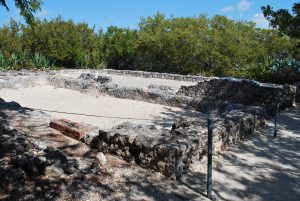